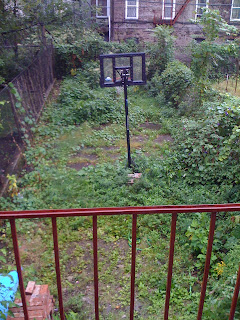 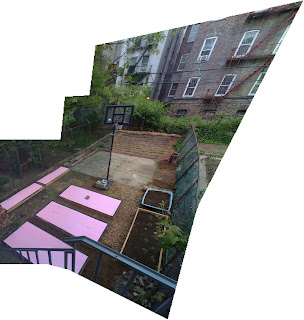 The lush Before photo shown above is deceiving. All that greenery belies the challenges that we are attempting to overcome on this site in Crown Heights. The good news: all that overgrowth proves the site gets plenty of sunlight. So here are the challenges a backyard farmer faces in Brooklyn:

Truth be told, I love a challenge...or eight. This site is so typical of Brooklyn, that I HAD to do this project as an experiment. How much of the site can I keep and put to good use, and how little can I bring into the site? It's a whole different process designing from a pile of given materials versus designing from scratch.

So here's the strategy:

I wish that construction was as easy as Photoshop: cut the bricks over here, paste them over there. In reality, there is some heavy lifting involved, and no Undo command. In the end, I had to bring a couple things through the house, but not much: mulch, hardware cloth, rigid insulation, and plastic sheeting.

While I have a preference for soil growing, I like to see hydroponics as another tool in my belt that is sometimes useful in urban growing. Instead of spending two years creating enough compost to safely grow veggies, we can have some veggies this year, and I love that non-existent watering schedule for floating raft hydroponics! The reduction in trucking top soil around cities seems like a huge bonus to me as well. Our top soil is yet another natural resource that we are depleting at a scary rate.

Some useful links to think about your urban soil:
Soil Contamination and Urban Agriculture - A Practical Guide
Urban Soils Potential Contaminants and Remediation Techniques
Abstracts of articles about urban soils and lead
Fellow New York Grower and his soil situation as reported by New York Times