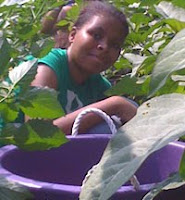 Donasia (left) and Brianna (right) are guest bloggers from our Summer Youth Employment Program at the High School for Publics Service Youth Farm in partnership with the Expeditionary Learning School for Community Leaders and their Growing Leaders program. 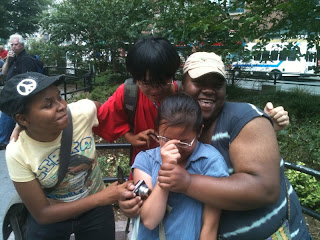 Wedneday, July 28th, we went to Union Square Farmers Market. Getting off the train station, our first impression was, “Wow!” We were acting just like tourists; we saw a lot of stores that we have never seen before. Tall buildings surrounded us. Unlike where we are from, Manhattan is more diverse. We felt as if we blended in with the crowd.

There were many statues in Union Square, a statue of Ghandi, one of George Washington, and some that we did not recognize. One in particular had a money jar in front of her. She was painted light blue and white, and looked like a Catholic figure. Some people put money in the jar. That was when she’d take a bow, and change her position until it happens again.

The first farmer that we saw was a berry farmer. Across a long table in front of him, he had blueberries, blackberries, and raspberries laid out. He said that he only sells berries on Wednesdays and vegetables on other days. It was to avoid competition between farmers selling in Union Square on Wednesdays.

The next stand we visited offered pickled everything, from tomatoes to cucumbers, okra, corn, and many more. We tasted the pickled cucumbers (original and spiced), and pickled corn. There was some hesitation at first, but surprisingly it tasted good. There was a nice balance of sweet and spicy. 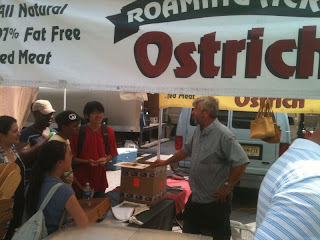 Later on in the day, we visited a farmer who takes care of ostriches and emus. His table was covered with ostrich skin. They sold their meat and skin, as well as their eggs which were the size of footballs and cost $30. One egg, cooked the same as chicken eggs, can serve 10-12 people. A fun fact that we learned is that ostriches would only lay when it’s sunny. The farmer there let us taste ostrich meat. According to the farmer, it was part of the poultry family, but it did not taste like chicken. It tasted like a part of the red meat family, and had the texture of steak. 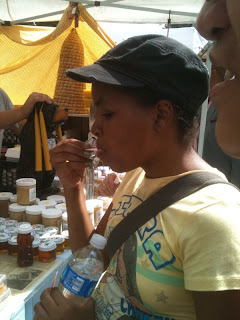 Overall, the farmer’s market experience was great. The prices were more expensive than we were accustomed to paying. For example, our farm’s beets would be $2/bunch. In Manhattan, it would be $3. Strawberry iced tea there was $2 for 6 oz. (the most delicious thing ever). We believe it’s because their farmers are from upstate NY, and other surrounding states. Their prices should be more expensive compared to us: we sell our own produce in our farm without using transportation.