Summer-of-Service Party on the Youth Farm! 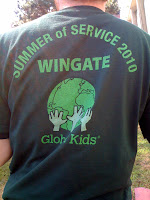 Just your average day yesterday at the Youth Farm...except instead of doing farmwork, Global Kids invited us to participate in a party to celebrate their Summer of Service Youth Employment Program and the DYCD grant they were awarded. So what do you get when you have 100 teens who are interested in food justice, nutrition, and agriculture on the farm? A bunch of teens showing off what they have learned on the farm and educating visitors through spoken word, dance, cooking demonstrations, farm tours, and information tables, that's what.

Global Kids have been working on the farm a couple hours each week for the past six weeks starting seeds, digging flower beds, and transplanting sunflowers. As you may have read, we also have our own Summer Youth Employment Program in partnership with Expeditionary Learning School for Community Leaders and their Growing Leaders program. Our teens are now experts on the farm after each working 135 hours on the farm, and Global Kids gave them the opportunity to strut their stuff yesterday. 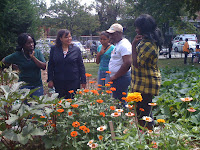 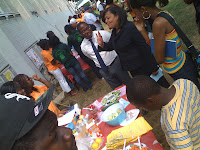 chosen to have Commissioner Mulgrave attend the festivities. After a phenomenal spoken word on food justice (I hope to post here at a later date after the writer gets it copywritten), Brianna, Daysha, and Donasia confidently gave the commissioner a tour of the farm. Mulgrave was no newby in a garden, calling out crops as she saw them and asking the teens detailed questions about landscape fabric and flower companion planting. Global Kids put Mulgrave to the test...taste test that is...to see if she could tell the difference between organic and non-organic fruits and vegetables. 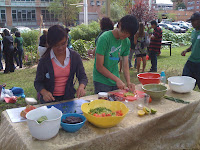 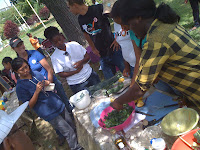 Meanwhile, Becky and Richard were tearing it up on a salsa cooking demonstration (all ingredients organic from the farm). People devoured the salsa, and I even watched a teen drink the jalapeno and tomato juice from the bowl when it was empty! The crowd demanded more, so Becky and Richard happily whipped up another batch. After two rounds of salsa it was time for Richard and Becky to lead a farm tour and Brianna, Daysha, and Donasia to lead a raw kale salad cooking demonstration. If you think that raw kale salad is a stretch for teens, think again. We have created 18 recipes for community meal on the farm and this was a recipe they chose to share as one their favorite. If you want to know the secret, you'll have to come buy one of their cookbooks at the farmers market (Wednesdays 3:30-7:00). 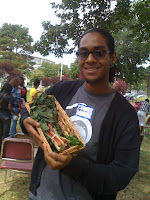 I know not all teens enjoy their veggies, but everything we cook on the farm they devour. My theory: you can't give someone frozen green beans and expect them to say, 'Mmmmm!' Teens have a fully-formed complex palette and their taste buds recognize good flavor. Make a recipe exciting, and they will eat the veggies and love them. At the end of the event, Global Kids raffled off some prizes including some fresh vegetables from the farm. Gabriel cradled his Swiss Chard even though he didn't know what it was and had never tasted it. He said, My mom's a chef...I'm not worried. It will be great.'

Our summer youth are fierce! Yesterday, they earned that title.