Ads that Scare the HFCS Out of Me 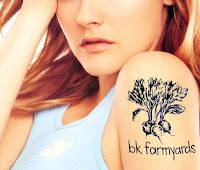 This marking period is Marketing Period in our Go Green! class. Last week, the teens deconstructed junk food ads and identified marketing strategies used to convince them to buy products. I saw an ad recently that showed a montage of a guy wearing a backpack and getting dumped by three girlfriends. He sits in a room alone with his backpack, and the ad says something similar to 'My backpack will always be there for me.' A backpack cannot replace a nurturing human relationship. Promoting a similar emotional desire for Ho-Hos and Big Macs is even scarier given their addictive ingredients that bring people back for more. 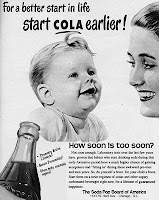 Junk food messages in the 50's were overt to say the least. If you can't read that fine print, here's what it says, 'Not soon enough. Laboratory tests over the last few years have proven that babies who start drinking soda during their formative period have a much higher chance of gaining acceptance and 'fitting in' during those awkward pre-teen and teen years. So do yourself a favor. Do your child a favor. Start them on a strict regimen of soda and other sugary carbonated beverages right now, for a lifetime of guaranteed happiness.' Message: you are a terrible mom if you don't get your child addicted to soda ASAP. Of course, there was also the scary Marlboro equivalent, 'Your child doesn't want you to be a high-strung mom. Chill out and smoke a cigarette.' 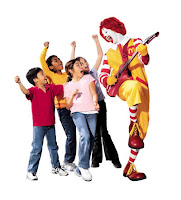 The teens in my class thought that these companies would be sued today if they tried these tactics. 'Everyone knows that smoking and soda are bad for kids!' They see less harm in today's ads where these same themes of peer acceptance and products bringing happiness are represented graphically instead of matter-of-factly stated. While the message may be less overt, the message is aimed directly at kids instead of at mothers who can make more educated choices. I can only imagine what it is like to go down the cereal aisle with a child: have you ever noticed how many of the sugary cereals are at the eye level of children.? 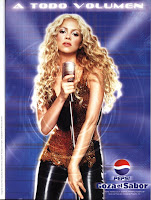 By the end of the class, the teens had countered all the advertising glitz with a couple hard realities: svelte and sexy, Shakira probably does not drink Pepsi; the Olympic athletes definitely don't drink Coca-Cola; none of the teens have ever seen Ronald McDonald or any other clown at McDonalds, let alone a clown playing the guitar; they do not suddenly become more unique and creative when drinking Pepsi; bigger is not necessarily better; with the plethora of Doritos out there, they do not need to guard them with their life; a product proclaiming it has 0% trans-fat doesn't also exclaim 'Mono-Diglycerides!'; Whopper does not have enough nutritional content to make you stronger...bigger, yes, but not necessarily stronger; and a Whopper definitely does not make you a Man. 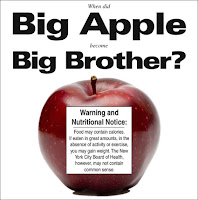 We covered a lot of ground, but we only scratched the surface. The Center for Consumer Freedom is calling the Department of Health the Department of Hype while running these Big Apple /Big Brother ads. Somebody is getting scared that people are paying attention to those Pouring on the Pounds ads as soda sales continue to decline. I'm wondering who's behind those Consumer Freedom ads. It seems reasonable to assume who might be behind them since these ads came out right about the time Bloomberg announced his plan to tax soda.

When I went in search of fresh fruit or vegetable ads, I came up short, very short. I found these Xtreme Baby Carrot ads, but come on! What's Xtreme about these carrots is that they are soaked in chlorine, processed, packaged, and shipped all over the United States. Looks like we have some work to do on getting the fresh food message out.