Preparing a harvest meal with 93 teens is a great day on the job. Considering there were four different class sections, and I got to feast four times…it was a fabulous day on the job. We prepared the most delicious $1 meal: raw kale salad from the farm; curry quinoa with sautéed veggies from the farm; homemade bread; mulled apple cider, and pear crisp with local pears.

Some students struggled with teaspoon and tablespoon measurements while others debated the best way to cut the kale to bring out the most flavor. Some groups eyeballed all their measurements and modified the recipes according to their own tastes.

This harvest meal was the culmination of the second marking period of the 10th grade Go Green! class I am co-teaching with the Community Action Now teacher at the High School for Public Service. The class is the students ‘health’ class, but it asks them to tackle one large question: what is sustainable agriculture’s impact on environmental and public health? 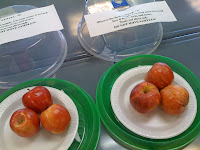 This proved to be an instrumental lesson for getting teens to try new foods. Raw kale salad didn’t look appealing to some of the students. I wondered how to get these students to try at least one bite, when other students convinced them, ‘Remember the organic apples? Those looked nasty, but they tasted so good!’ I love when peer pressure is used for good and not evil.

For the second part of that apple experiment, we brought in local, organic Gala apples for the students to compare to organic Gala apples shipped form farther away. Again, it was almost unanimous that local apples were the favorites in taste and texture. Teens are prone to exaggeration, I know, but some teens exclaimed, ‘The best apple ever!’

While we hoped for recognizable differences between the 3 apples, we got way more than we bargained for. We don’t have to tell them that local and organic are more than mere words, they tasted the difference. It’s no longer abstract that something that is picked fresh from the farm is going to taste different (in this case better) than something shipped across the country.

I become more and more like my mom every day, believing that the way to someone’s heart is through their stomach. Because our taste tests have been such big hits with the teens (homemade bread vs Wonder Bread, and salsa made fresh from the farm), I can’t wait to do a taste test of fair trade, organic chocolate versus Hersheys. While I think that being able to taste workers rights is a bit of a stretch, it’s sure going to be fun trying.